Performa Ride were so very excited to be attending the American Endurance Ride Conference in Reno Nevada. It was a trade event we had contemplated for a little while after hearing about it from our friends at Scoot Boots Australia.

We have been to a number of endurance events in Australia, everything from the 50th anniversary of the Tom Quilty, to the 5km intro ride at Wingello. These events are something that we talk about, a lot, at every event we go to. Endurance competitors, organisers, and spectators are an actual community. They camp together over night, socialise at length, and help each other through their rides. Performa Ride has always felt welcome at endurance events.

Travelling 26 hours to get to Reno, for a two day trade event, may seem a little extreme… Though we had an amazing time! The people in Reno were lovely across the board, everyone from my new favourite Lyft driver, through to the amazing waitress at Johnny Rockets.

Across the two days of trade, we met competitors and traders alike, and learned so much about the amazing endurance community in America. The Performa Ride stand was next to the Ride and Tie stand – what is Ride and Tie you ask? Ride and Tie brings together runners and riders – like endurance meets UTA, the perfect competition for ultra-runners and endurance riders. Ride and Tie allows for runners and riders (one of each) to begin the race together, and as the horse travels quicker that the rider, it is tied to a tree at a predetermined time. The rider then takes of running, and the runner catches up to their horse, and starts their ride. Ride and Tie has since evolved to include events where you can either rider or run, and you don’t have to do both.

We also heard about the Tevis Cup, a 100 mile one day ride, not unlike our Tom Quilty. The Tevis Cup is credited as the birthplace of modern endurance, having launched in 1955. From many of the discussions that we had at the American Endurance Ride Conference, we understand there are several differences between Tevis and Quilty. Tevis is a point to point ride, vetting is not in a singular spot, so your crew(s) must travel from one to the next. The Tevis Cup is run under the summer full moon each year, as this enables the best light for the full 24-hour ride (day or night).

Speaking with vets, barefoot trimmers, and riders (Americans and even a few Aussies), we left the endurance conference amazed at the incredible people in the endurance community. Performa Ride was welcomed with open arms, and we learned so much from the amazing people we met, and we can’t wait to watch the Tevis this year! 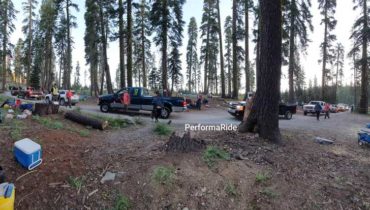 The Day I Accidentally Crewed At The Tevis Cup…

Performa Ride Teams Up With RDA